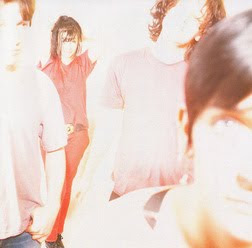 Whatever the hell it's called, for the first time for bloody ages there's a recognisable genre of music seeping out that i feel a connection to. Or, do i feel an affintiy with this amorphous pop music precisely because it requires no connection?

This is music that blurs the edges of connection, that exists outside the rational and the physical, looking beyond the palpable, somwehere in memory, somewhere out of time.

and I've been here before.

Anybody who's ever spent time with me will no doubt have had to endure at some point listening to My Bloody Valentine at deafening volume. They will also have had to listen to A.R Kane's '69' with me wittering in their ear about how this group were the unhearalded fore bearers of ambient rock, oceanic rock, shoegaze and countless other genres that possibly don't exist. And members of Magic Alex certainly had to listen to cries of, "Can we have more distortion on this track and make it sound more like Spaceman 3 please".

Shoegaze, the coalition of bands circa 1989-1992 was one of those movements that sounded stupid almost as soon as it was invented. Named after the artists (MBV, Ride, Pale Saints, Moose, Chapterhouse etc) propensity for gazing down at their shoes during performance, it seemed to me as obvious a progression for popular music as abstract expressionism was for fine art, but, perhaps, wasn't the sort of music that your Dad wanted to listen on a long car journey together (Me: "No Dad, it's supposed to sound like the casette's broken", Dad: "Can we have Tina Turner back on now please"). By 1994 any band claiming to be influenced by shoegaze were laughed out of town.


But, this recent glut of bands who's musical aesthetics mirror those of my shoegazing heroes didn't come out of nowhere though. Over the last few years, a band who I was fortunate to sign to Memphis Industries, The Russian Futurists were, in my opinion a kind of trailblazer for introducing a post modern 'un' sheen to pop music. Taking a lo-fi approach to electronic pop and creating (maybe by accident or by design) a thick mist of noise which rendered the music a slightly woozy quality, like it almost wasn't there. A sound akin to when in the old days you'd tape a record before taping it again for a friend (and perhaps again and again) until the hisses and pops accumulated became synonymous with the music.

But perhaps the artist that really spearheaded this current (chill)wave of artists is Noah Lennox aka Panda Bear, who's 2007 album Person Pitch raised the bar for nu-gaze (sorry, i'll stop in a minute). Sounding like a Brian Wilson crooning from beneath the waves, it perfectly married what is essentially avant-garde form with beautful blissed out pop music. A day spent without this album truly is a poorer one.

Anyway, here's a chance to get your lugholes around some choice tunes that have been popping up over the last months and that seem to exist within the same space.


Deadbeat Summer by Neon Indian is to my mind the kind of music that Daft Punk should have made post 'Discovery' - here Neon Indian take the analogue-y, squelchy dance beats and robotic melodies and turn them inside out, creating a dance song that sounds like you're on the waltzers spinning round, feeling sick but deliriously happy. Their album 'Psychic Chasms' is pretty much on repeat round my house these days.

Bicycle by Memory Tapes veers more towards the New Order side of things (check the ripped off Barney guitar break half throught the track for proof of that!) - it reminds me of the Beloved remix album 'Blissed Out' a little too (a very underrated album that).


Feel It All Around by Washed Out to these ears sounds like a failed remix of 10cc's 'I'm Not In Love'  by Jam & Lewis circa 1987 that got consigned to the dusty vaults and has only been discovered and reinterpreted now. Which obviously means that it sounds pretty great.

Finally, for those of you who never heard it here's the final track from Panda Bear's masterpiece, 'Ponytail'

Next time i'll be writing about my favourite tunes and albums of the year, till then, stay dreamy...
Posted by Unknown at 15:35

Pitchforkwavegaze? You made those up, right? But as far as I’m concerned, shoegaze could be part of your (improbable) list.

Anyway, really good pointers to this “whatever the hell it’s called” genre which I, in my straightforward way, would classify as “music to hear” as opposed to “music to listen to”. Is it because it requires no connection, as you say? Probably. It makes a cosy familiar musical background. At least it makes it for me. Little musical gems indeed.

I think I might check out these shoegazing bands now…

"A sound akin to when in the old days you'd tape a record before taping it again for a friend (and perhaps again and again) until the hisses and pops accumulated became synonymous with the music."

I never really thought about it when I retaped stuff. Maybe I'll go back to old tapes and listen to them and find some beautiful things on them. (:

"A day spent without this album truly is a poorer one."

After a line like this, how can you not give this album a chance? I'll def. check it out.