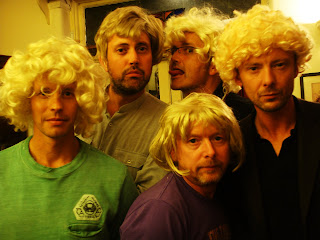 "One chord is fine. Two chords is pushing it. Three chords and you're into jazz." Lou Reed

Once when me and John S were sat in a hotel room with Ian McCulloch in the early hours, apropos of nothing, Mac suddenly declared that there were only three bands that mattered, The Bunnymen, The Velvet Underground and Magic Alex. Now if some random bloke in an internet forum had said that it would have made my day, but the fact that one of my teenage idols (a man who at the age of 14 had inspired me to coat my hair in orange juice so that it would get the correct amount of 'lift') was saying it, to my face was, shall we say, rather special...

The fact that he was wrong didn't matter, what was more important was that we'd reached a place musically that we'd been aiming for, a place that was identifiable.

Y'see when me and bass player Simon first put an advert in the (now defunct) Melody Maker for musicians wanted we listed our influences as The Beatles, Sly & The Family Stone, Roxy Music & Can. Which basically meant, look how ace our influences are, but gave potential members absolutely no idea as to what we wanted to sound like. This reflected itself in the first few years of Magic Alex's existence. We'd go from playing a cute pop song to a noisy dub monster to a slow jazzy ballad in the blink of an eye, thinking we were being eclectic when really we just sounded confused.

And then one day, we were listening to The Velvet Underground's 'What Goes On' and it all became clear. Less is more. Enough of trying to cram obscure suspended 7th chords into tracks, enough of me trying to prove how clever lyrically i could be. The results were immediate. We wrote our first good song 'Chica Chica' and with every song we wrote after we distilled what we wanted more and more until we became a (pretty) well oiled rock and roll band.

As you can see from the photographic evidence above, last weekend was a bit of a get together for us. In an attempted age-defying scam we toyed with the idea of doing a gig as Magic Alex Jr's and get our collective kids up on stage miming to our songs. We also looked into the possibility of blonde hair implants. Neither look as likely on this wet Tuesday afternoon.

One thing you should keep your eyes peeled for though is the London gig listings this coming Autumn.

02 What Goes On By The Velvet Underground.m4a

"One thing you should keep your eyes peeled for though is the London gig listings this coming Autumn."

The waiting is unbearable :(

I've had a great time reading all posts, listening to the posted tracks and indulging in lovely memories...

Looking forward to the next one. Thanks for sharing!