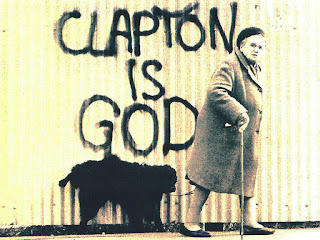 Clapton is God? Really??
Cos to these ears he's made some of the worst music i've ever had the misfortune to hear. When i was younger, i used to read (respectable) journaists waxing lyrical about which Clapton period was the best, when i think it would have been handier to my formative mind, for them to be discussing which period stank less of shit.

Don't believe what the people say. In the late 60's The Velvet Underground, Love & The Stooges sold about 10 records between them and this idiot was prancing around London like he owned the place.


I was thinking of posting the videos below with the Clapton cover beneath them, but although it would demonstrate the palpable GULF between amazing music and horrible overwrought gibberish, it would be too painful for all concerned.
So, anyway, here are some amazing tunes


And he murdered them all. What a prick.
Posted by Unknown at 14:57