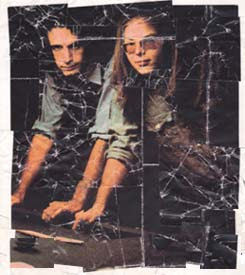 Back in 1990 when John S went down to London to make his fortune we used to write to each other about once a month. At the end of these letters we'd include our current top 20 songs and albums and in December we'd create our own end of year lists, commemorated with a C90.

The funniest thing was looking back at these tapes and wishing some revisionism could take place. ("look, there's no fucking way that i really meant that Moose were number 2", etc) The magazines end of years meant a lot to us, we'd get very angry with the mainstream press for the lack of inclusion for Julian Cope (and looking back, in hindsight, actually we were right...)

We dont make these Tapes (or cd's) anymore but maybe technology has made a way of making this relevant. John - it's your turn next....

10) 'Feel It All Around' - Washed Out : Those semi observant readers may have noticed this song was in my last blog and nothings happened in the interim to change my mind that this is 2009's ultimate blissed out 3 minutes.

9) 'Laura' - Girls When at the age of about 15 i was devouring music and developing lifelong obsessions with the likes of Television, Big Star and The Velvet Underground - i was forever looking for the next musical high. Occasionally an artist would crop up that despite a widespread reverence i just couldn't enjoy. Elvis Costello is a great example - back in the 80's every journalist worth his or her salt would bang on about EC with a zeal beyond my comprehension. Anyway, the Girls album this year was, to me, like a whitewashing of all the annoying nasal vocal tics and pseudo intellectualism that Costello possessed, leaving us with a great 'classic rock' album full of warm, heartfelt pop tunes like this one...


8) 'Bicycle' - Memory Tapes - Bicycle by Memory Tapes is a song thats been played a LOT this year, a song that's happy to to exist, perfectly in the background. A song that even Betty my two year old was moved to comment 'I like that one!'


7) 'All The Kings Men' - Wild Beasts. I bloody love The Wild Beasts - reminiscent of the spindly, inventive, giddy pop of the early 80's (The Associates, Wild Swans, Bunnymen). Swooning, hyper-romantic and otherworldly. Get involved via Spotify now.

6) 'Deadbeat Summer' - Neon Indian. A cursory glance at my last.fm page tells me that over the last 12 months this has been my most played song. A song that makes me feels queasy, want to dance and one that i know all the words too - says a track of the year from my album of the year.

4) 'Stillness Is The Move' - The Dirty Projectors. Since Magic Alex DJ's went into hiatus. I often daydream of our (glorious) return. And i stockpile records in my head that will go straight to the turntable - this being one of them. R&B meets Luscious Jackson 2009 style. Nice.


3) 'Heart In Home' - Kwes. When i heard this in January '09 - it blew me away. Like nothing else around, it made me feel a bit like when i first heard the cocteau twins. I've waited all year for a follow up, but nothing. There's no video for this track either, so get your ears round it here http://open.spotify.com/track/56zPIzc9izdDX1nfKOASB7

2) 1901 - Phoenix. I've seen people recoil in horror when i've put this on the stereo in social situations. But that just makes me love it even more. to my mind, when i hear this song i'm back in 1985, great trainers, hazy sunshine and life bursting with possibilities


1) 'Start/Stop/Synchro' - Rose Elinor Dougall. Cheat! Fix!! Con!!! But quite simply, how could my track of the year NOT be this? Ok, for those who don't know for the last 18 months i've been helping RED, amongst other things, get an album together. But, fuck it, i've lived and breathed this song for almost all of that time and i still think it's a thing of wondrous beauty. It still stops me in my tracks when the chorus comes in (just like it did the first time i heard the demo). There'll be an album next year and a sort of closure for three people who worked very hard on this, until then this is still the air i breathe.

See you in the new year pop kids

I'll be the first to bitch... What?! No White Denim?! "Mess Your Hair Up" continues to kick my ass every time it comes on my iPod.

Your blog has turned me on to some great stuff this year. Many thanks and Happy New Year

I just discovered this blog, searching for information about Majic Alex, and I'm so glad I did. Great list! A lot of great music I didn't know before.