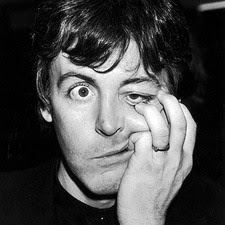 When i used to work at Memphis Industries ploughing through the awful demo's I used to bemoan, why don't we get a demo from somebody as wildly inventive, as fully formed, as jaw-droppingly brilliant as Roxy Music circa their first album? Imagine how bloody brilliant it must of been the day Ivo Watts-Russell got The Pixies Come on Pilgrim demo's on his desk? But it dawned on me slowly but surely that band's that special don't come round every day, or in fact very often at all. Last night i went to see a band that might just be that special.

White Denim kicked my ass for an hour solid last night. This, i thought as the drummer stood up and casually played the greatest drumming i've ever seen, with one hand, must have been a bit like when Jimi Hendrix strode into London town in 1967 and casually blew Eric Clapton off his self-imposed perch. Don't get me wrong, there's no point rushing to the bands myspace expecting the finished article, but if the age of the bass player (he looked about 13) who sold me the t-shirt is anything to go by (yes, i bought a t-shirt at a gig, the first time for about 15 years) there's every chance that when they do become the 'article', they'll deserve to be mentioned among the greats. This song was one of the main ass-kicking perpetrators last night Mess Your Hair Up . If you get the chance GO AND FUCKING SEE THEM.

This morning me and the wife were discussing which bands we'd seen in the past that equalled the mind-blowing qualities of last night, for her Atari-Teenage Riot in the mid nineties was a contender, for me there were lots, but one we could agree on was My Bloody Valentine, last year at the Manchester Apollo.

Now back in 1992 there was a tour put together by The Jesus & Mary Chain called the 'Roller coaster' tour, it featured JAMC headlining plus MBV, Dinosaur Jr and the then, little known Blur. I remember quite distinctly not being able to afford the ticket because it was £17.50 which was beyond my student budget. Obviously in retrospect i should have mugged a granny, but instead i had to sit and listen to friends regaling me about how amazing the night was, especially My Bloody Valentine and especially the 20 minute 'noise' section at the end of You Made Me Realise.

As a result in my head, I'd always built up a mythical status for them as a live entity, especially as Kevin Shields seemed more likely to announce himself as my long-lost real father as he was was to produce a new record or play MBV material again. So, when i held the ticket for that show in my hand, I was, shall we say, just a little excited. And let me tell you I was not disappointed. From the moment they came on stage i was nearly wetting myself with excitement (or the fact that it was packed and the toilets were on the other side of the venue, but I digress...) Bathed in beautiful hues of electric blue and crimson red they proceeded to play almost every song in their catalogue. By the time the 'noise' section came we all thought we were prepared (earplugs had been given as we entered the venue), but nothing on earth can prepare you for that. Imagine standing underneath Concorde as it took off and you're maybe 3/4 of the way there. For 5 minutes, it's rock and roll, then it becomes annoying, then you go to a place where time, space & rational thought doesn't really exist (i remember remarking afterwards that it had been living proof that you can feel bored and exhilarated at the same time.) I'm not posting 'You Made Me Realise' here, but another song, a B-Side, Off Your Face' which has always been my favourite MBV song and which i was beside myself with untrammelled joy when they began 04 - My Bloody Valentine - Off Your Face.mp3

I've thought long and hard as to which other gig to mention here, maybe The Stone Roses at the Empress Ballroom in 1989 (me to my sister, "why is everybody smiling and grimacing at the same time?") or the Throwing Muses at Manchester University 1992 (I fainted, got stood on the face by a lady in stilettos, before getting back to find the car had been broken into and the windows smashed, driving home on the motorway with the wind rushing against my bleeding, bruised face) why not The Mock Turtles at the Blackpool Station in 1990 (at the end of the gig a part of the Turtles entourage informed me that the female keyboard player requested my presence at her hotel bar - i politely declined).

But no, the last gig worthy of mention is Love with Arthur Lee at the Garage Islington in 1996. Like most music-obsessed boys I'd discovered Forever Changes and had my mind altered forever, but the thought that Arthur could come to my local (at the time) venue and play the whole damned thing note perfect was beyond my expectations. Myself and John S went to this in the perfect mind-altered state and watched in awe as a real genius showed us mere mortals how it's done. Every song oozed class, but this one Love - 06 - She Comes In Colors.mp3 sticks in my mind as perfection...

Ok, some quick 'me' facts before i leave you.

My first gig - Kids From Fame at the Winter Gardens Blackpool 1982 ( i wore white leg-warmers fact fans) - i could've lied and said The Police but that was three weeks later. Don't remember much about it apart from Shorofsky, which went off like a mutherfucker.

Artist seen the most times - Black Lace - no shit, when i collected glasses during the summer of 1987 Black Lace were the house band they played three times a night (consummate professionals) which by my reckoning means i've seen their live show over 200 times.

And finally, my favourite gig of all time was The Pixies at Preston Guildhall in 1990 from which I'm still speechless.

great blog! please check out or maybe add this on your link:
http://noiseboxmusiccollection.blogspot.com/

we share same interest in music. thanks and keep up the good work!

Interesting reading, thank you - I'm listening to Mess Your Hair Up! Now onto A Matter of Time. Great music. love aria x