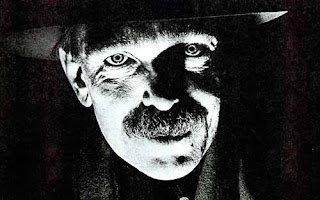 
I got myself an addiction.

For the last month, i've played pretty much nothing but Captain Beefheart.

A cursory look at my last.fm page will confirm this. 359 plays in the last three months - and they're just the ones that have been 'scrobbled' (further investigation will uncover that I've played Del Shannon even more, but the truth of it is that i accidentally left Spotify playing his tracks over night after a little too much whiskey).

Now dont get me wrong, i bought Trout Mask Replica in my late teens and played it through maybe 3 times before deciding that it was a little too obtuse even for me. But what's happened i guess over the years is that listening to artists influenced by Beefheart has softened me up to him. The snake-y, yet jagged non-sequitur guitar motifs of  the likes of Fire Engines, Pere Ubu and That Petrol Emotion that entranced me with their originalities were actually direct copies of the great man. See below:

However it wasn't 'Trout Mask Replica' that opened the door for me, but rather a relatively obscure album he made with the Magic Band (mk 1) in the mid 70's called Clear Spot.

Sorry to be all musicianly and everything but the production and the playing on this record are simply in another world, everything is dry and in your face, there's no escape from any of it and that's before the Captain smears his personality over the whole thing. The bit of information that blew my mind (especially as somebody who was only a poxy vocalist who wrote just words and melodies) was that Captain Beefheart composed every single note of these architectures of sound (" I play the drums - I play the guitar - I play the piano. I want it exactly the way I want it - exactly. Any composer, I would think, would want it that way and I don’t deviate at all. Don’t you think that somebody like Stravinsky, for instance, don’t you think that it would annoy him if somebody bent a note the wrong way? Or used a purple bow on a violin, when you want a red bow, or a green bow").

This sort of control over songcraft (apparently he taught the band via piano, sometimes it took him days to convey a guitar line for a section of one song) whilst not only being rare led to some highly combustible scenes between him and the Magic Band. Leading to them leaving in the mid 70's and eventually being replaced by another shit hot ensemble.

The song that is on constant repeat at the moment for me is Tropical Hot Dog Night, where Beefheart (seemingly) has a bit of fun with his encroaching middle-age whilst simultaneously reacting to accusations of him dumbing down his avant-garde leanings for a more accessible sound. Some lines sound so much better when sang by the great man, but ("Tropical Hot Dog Night / I'm playing this song for all the girls to come and meet the monster tonight/ How would you like to be the lucky one to be the monster tonight? / Everything that is wrong at the same time is right / You get to be with me")

Right, I'm off to listen to more Beefheart. I might be some time...

For those with Spotify check this playlist out:
beefheart
Posted by Unknown at 16:43

Thanks again for a great blog. Happy Easter to you and yours! ;-)